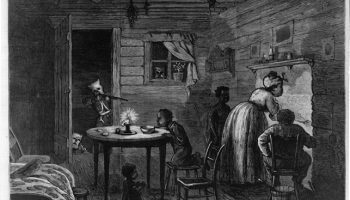 We discuss representations of the Ku Klux Klan.  Students observe that the family in “Visit of the Ku-Klux” looks innocent, but that the family may have been attacked because the Klan perceived one or more of its members as a threat to their way of life.  Students suggest that the wearers of the masks must have used their costumes to solidify their sense of power and superiority.  We also discuss an editorial cartoon based on specific news stories – “Negroes Sold as a Punishment for Crime” and “Negroes Whipped as a Punishment for Crime.”  “They’re both punishments for a crime,” one student says, “but you don’t know what the crime is.  I would guess it’s a fake crime so they could get their slaves back.”  “‘Slavery Is Dead?’” another student reads.  “They’re questioning whether it’s really true.”

ORLANDO:  The picture on the left shows someone being sold.

JULIAN:  There is a guy with a whip on the right hand side.

TAVI:  The person being whipped is covering his mouth — that’s a metaphor for he can’t speak.  Above, the statue of justice is blindfolded, blind to the unfairness.

ORLANDO:  The picture says “Public Sale” — anybody can buy him.

KAYLANNA:  The person whipping the slaves is smiling, also the people watching.

ALEX:  Liberty in the whipping picture is holding a scale that’s off balance.

LUYA:  In the middle it seems like it says “A. Lincoln.”

MACKENZIE:  Underneath that, “Slavery is Abolished.”

MADDIE:  Above the first picture, in the corner, it says “Auction Sales,” and there is the thing judges hit [a gavel].

NYLA:  At the bottom there is “State Rights,” a skeleton, a snake, hands holding the auction thing, and a whip.

LEILA:  Before “Slavery Is Dead,” and afterward, there are question marks.  It’s signed by Thomas Nast.

LOGAN:  He liked to show, kind of, irony.  The black man is being sold in front of a liberty statue and he’s looking up at it.  It looks like there are more black people about to be sold.

DANIEL:  The slave that’s being whipped looks pretty buff.  They don’t have any guns.  Why didn’t he get up, do some push-ups, and whip the viewers?

LOGAN:  You can tell that it’s the south because there’s a palm tree.  It’s 1866 — that’s before Reconstruction ended.

BEN:  The eagle’s head is looking away from the slave.

RACHEL:  There’s the Emancipation Proclamation, and they’re auctioning off slaves.

TIM:  I wonder who the guy whipping is.  He’s whipping the freedman.

TEACHER:  Why are you calling him a freedman?

?:  Either he did something, or he’s whipping him because he’s black.

ROSE:  They’re both punishments for a crime, but you don’t know what the crime is.  I would guess it’s a fake crime so they could get their slaves back.

CLARA:  I thought it was blood or some liquid all over the top that makes the quotation marks around “Slavery Is Dead.”

DANIEL:  If it’s two free guys — he just got on his knees and let him whip him?  Isn’t that his fault?

ORLANDO:  He didn’t defend himself, or fight back.

RAVENNA:  If he hasn’t eaten in a long time or is worn down….

FRANCESCA:  If he fought back, the other white men would attack him in a mob.

MADDIE:  The white man could take him to court.

TIM:  It’s just, like, really palpable, the hatred that people would have against other people to do this.

ELENA:  People might think some people are inferior to them … but why do they think it will make it better to kill people?

TIM:  If you get enough white people to say black people are bad that’s going to happen.

CLARA:  You know how, in hotels, they have little notepads and pencils?  The [back] has writing on it and a stamp on it — it might be from somewhere.

NORA:  Another random thing I noticed — in the background there’s a checkerboard pattern.

BETHANY:  I have a question.  Why would they take pictures of themselves in their KKK outfits?  They have masks over their heads — they don’t want people to see their faces.

ALEX:  The family didn’t know there was a guy with a gun in their house?

LUYA:  There’s a really small room or bed on the left side.

LOGAN:  I’m wondering why in the first place they had the door open.  They wouldn’t have had it closed, because [if it had been closed], they would have heard them open it.

LOGAN:  I’m surprised that there wasn’t more light.  One candle, the fireplace — in reality it was probably quite dark.

ANNELIESE:  [The family looks] so innocent.

NORA:  They live in a one-room house — they probably didn’t have enough money to buy a larger house.

NEIL:  There are three klansmen.

TEACHER:  [Asks people to think about a book some of the students had been reading:  Roll of Thunder, Hear My Cry]

KARLTON:  They chose people who were causing problems, starting things, trying to be big and stuff.  …  I think it’s because they fear them.

CLARA:  They would want to kill the ones who were the most threat to them — the radicals, the activists.

ELENA:  People who had something they wanted, like the Logans had a lot of land.  Mr. Logan was big and strong, but a lot of them could overpower him.