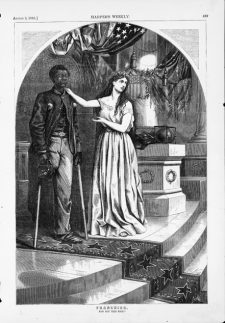 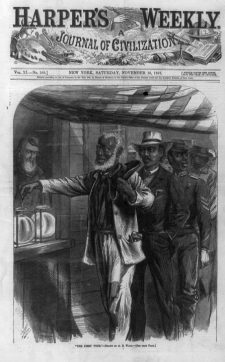 We look closely in turn at three editorial cartoons published in 1865, 1867, and 1868 (to see the third, scroll down to Questions and Activities and click View More).  Students explore the significance of a surprising number of details: “He looks like a soldier and his belt says ‘U. S.’”  “There’s a mallet and a chisel in his pocket.”  “He was getting water for his mommy and on the way back he saw the meeting and started listening.”  We then ask about connections among these images, and between these and other sources we’ve examined. We invite the students to construct stories that include all three drawings in chronological order, and to tell the stories out loud.  (This could be a writing project in addition or instead).  In their stories, the students also articulate connections among the right to serve in the military, the right to vote, and the right to campaign for office and to exert political influence and power.

We gave the students all three editorial cartoons, scaled down, on one sheet of paper, with space on the back to record observations and questions.  We also established several stations, each with large-scale copies of one of the cartoons.  We divided the class into groups and sent each group to a station, then asked the groups to rotate until all the groups had spent time with and written down what they noticed about all of the large-scale copies.

Homework (optional):  Students could take their recording sheets home and add to their observations for homework.  The next steps could happen the next day.

We then gathered the class together and discussed the cartoons in depth, one at a time.

What do you notice?

What puzzles or confuses you?

We repeated the questions above with the second cartoon.

We repeated the questions above with the third cartoon.

Three images:  “Franchise:  And Not This Man?” “The First Vote,” and “Electioneering at the South”

We then looked at all three cartoons at once.  We asked:

What do you notice when you look at these images side by side?

How do these images connect to or remind you of any of the other sources we’ve studied?

Homework: If you were to construct a story, a short narrative including all three images in the order in which they were published, what would the story be? (Our students told their stories aloud, making them up on the spur of the moment. Instead, or in addition, students could write or elaborate their stories for homework, and then share them in greater detail in class the next day.)

For student responses, scroll down to Student Responses and click View More.

DAKOTA:  He has a missing leg.

MADDIE:  There’s a voting thing on the table.

LUYA:  What was the exact month slavery ended?  It’s weird that it’s right after slavery ended, because a lot of white people didn’t like black people, and it looks like she’s praising him.

For more student responses, scroll down to Student Responses and click View More.

BETHANY:  I thought he was a soldier guy.

TEACHER:  What made you think he was a soldier?

BETHANY:  He looks like a soldier and his belt says “U. S.”

TIM:  He represents the soldiers, like, who just came back from the war.  It’s a new place they’re coming to.  …

OLIVIA:  In the background there are lots of American symbols—shield, flags, ballot box.

NORA:  Maybe she’s saying he’s an American citizen because he’s done all this stuff, and he should be able to vote.

TEACHER:  Who else?  Does anyone want to add anything to this?

TEACHER:  So you don’t agree with what Tim said.

BETHANY:  ’Cause she’s not really moving.

TEACHER:  So you’re saying it doesn’t look like she intends to move — she’s not really walking.

NEIL:  What was the title supposed to mean?  “Franchise.  And Not This Man?”

[They look up the word “franchise.”]

ROSE:  I think she’s saying, like, he was a soldier … for the country and he can’t vote.

MARTYN:  And he can’t vote because he’s black.

JULIA:  She’s showing people that he can’t vote but he should be able to … and then the ballot box is there for him to put the vote into.

ALEX:  He’s a soldier and he doesn’t have rights.  He lost his leg fighting for this country and he can’t vote.

LOGAN:  She chose him because he lost his leg.

KAYLANNA:  It looks like the person in the front is a farmer.

LEILA:  There’s a mallet and a chisel in his pocket.

LUYA:  The person someone said is a soldier looks more like a train conductor who takes tickets.

LEILA:  I think he is a soldier.  I don’t think a conductor would wear that.

CLARA:  [She describes the three as farmer, businessman, and soldier.] All these different kinds of people and they’re all going to vote.

ALEX:  Above them is the American flag.

NORA:  I notice that there are women and men.

BETHANY:  There’s only one white person.

ANNELIESE:  It looks like they’re talking about an election.

JULIA:  The artist wanted to draw the houses in the back so it would be obvious that it’s a common neighborhood.

CLARA:  It reminds me of Negro Life at the South because the house in the background has the same structure as that house, and they’re all sitting and doing something out front.

FRANCESCA:  He’s teaching or presenting them something.

ALEX:  He might be running for a position in the town.

Three images:  “Franchise:  And Not This Man?” “The First Vote,” and “Electioneering at the South”

RYAN:  [In “Franchise:  And Not This Man?”] she’s introducing someone who will vote.  Maybe he’s here in the meeting [in “Electioneering at the South”].  [In “The First Vote”], they all come to this place to vote.

OLIVIA:  [The soldier in “Franchise:  And Not This Man?”] was in the war and lost a leg.  [In “The First Vote”], he decides he wants to vote.  After voting, he gets inspired to run for office [in “Electioneering at the South”].

RACHEL:  [In “Franchise:  And Not This Man?”] she’s showing how brave he was and asking why this man doesn’t have the right to vote.  Congress got inspired and gave people the right to vote in some states [as shown in “The First Vote”].  Then [in “Electioneering at the South”] they have a meeting about how they can get into the senate.

Image: “The Operations of the Registration Laws and Negro Suffrage in the South,” Frank Leslie’s Illustrated Newspaper (November 30, 1867). Eight scenes: 1. Jury of Whites and Blacks. 2. Freedman discharged for voting the Radical ticket. 3. Scene in Registration office, Macon, Ga. 4. Potential arguments to the Freedman for his vote. 5. Freedmen … New Orleans. 6. Reading the Government order of Rights and Privileges to the Freedmen. 7. Congratulating each other on the successful result of the election. 8. Discussing the merits of the candidates. Prints and Photographs Division, Library of Congress. | VIEW

Image: “The Fifteenth Amendment,” C. Rogan (1871).  Print showing President Grant sitting at a large table, with group of men clustered around (identified below print), signing the 15th amendment granting that the right to vote cannot be denied on basis of race or color. Vignettes along sides and bottom show African Americans in military service, at school, on the farm, and voting. Prints and Photographs Division, Library of Congress. | VIEW

Image: “A ‘Dodge’ That Won’t Work,” Currier and Ives (1872). Greeley, behind whom stands Jefferson Davis with his cat-o-nine tails and chain, appeals to Negroes “Sam” and “Ceasar” for their vote. They will not vote for Greeley, for behind him they “see Jeff Davis and behind him is the old lash and bondage.” Prints and Photographs Division, Library of Congress. | VIEW