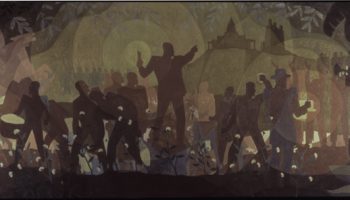 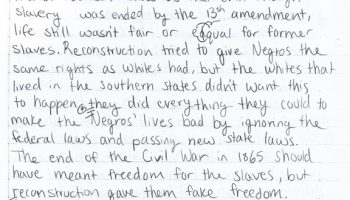 Introduction to a student's essay, 2010.

Our centerpiece here is the mural Aspects of Negro Life:  From Slavery Through Reconstruction, painted by the Harlem Renaissance artist Aaron Douglas in 1934.  His overlapping and interrelated scenes resonate with the primary sources we’ve encountered throughout this investigation,  inviting reflection and challenging students to weave the sources into their own stories of slavery and Reconstruction, which we ask them to write and revise.  As the artist created this work long after the Reconstruction years ended, the painting also encourages students to consider the significance of those years for his generation — and, by extension, for ours.

NORA:  In Douglas’s painting, a central figure holds up some sort of light (a candle maybe?).  On the right, another light source meets it, but the left is left in darkness.  I think that the light and dark parts of this painting show the good and bad parts of Reconstruction.  Land was reserved for Blacks, shown in the Preempted Land Map (1864) and General Sherman’s special field order (1865), but later taken by President Johnson and given back to the former land owners.  The contracts (1866) show that Blacks worked for money and things, but the excerpt from Diary in Dixie (late 1865) and the Joint Committee Report (1866) explain that they were forced to work for their old slave masters.

ELENA:  In Aaron Douglas’ painting … we see a man with his fist raised in the background.  The man mostly blends in with everyone else in the painting, except for the fact that a broken chain dangles off the wrist that is raised.  The broken chain symbolizes that the man is free.  This is because when he was a slave, he was in chains and now that he is a freedman, his chains are broken.  But, also in the background of Aaron Douglas’ painting, you see KKK members mounted on horses, attacking the black men in the painting including the man with the chain around his wrist.  Yes, we can still call this man “free.”  But is his chain really broken?

?:  The man playing a trumpet with a dancing woman by his side could represent rejoicing.  Considering the circumstances of the painting, I thought that they could be celebrating their freedom after breaking the chains enslaving them, shown in another symbol.  When I thought of what sources had recognitions of triumph where people celebrated, the first source that came to my mind was the excerpt, “Life at the Sea Islands,” published in 1864 and authored by Charlotte Forten.  In the part that I am thinking of, Forten vividly describes her experiences of New Year’s Day [Emancipation Day]….  Such a long fought for victory deserved the song and rejoicing given to it.  What I learned from this source was that the government did demonstrate some aid in the abolition of slavery, but I didn’t really feel while learning the whole story of Reconstruction that they did enough.  Since this was also our beginning source on the Sea Islands, I also learned that it was one of the places where slaves had been freed before slavery ceased so freed Blacks had many more opportunities to work for fair compensation, get good land, and have a chance to get an education there.

LOGAN:  Reconstruction and its aftermath were times of false freedom for freedpeople….  Black people were made to feel cheated, denied, inferior, and even hunted in such times.  The first element of the painting that I found that provided evidence to support my point was the cotton.  I saw cotton everywhere in the image:  people were being surrounded by it, and even, in one man’s case, carrying baskets of it.  To me, this cotton symbolized freedpeople being forced to go back to a slavery-like way of life, and worse.  For instance, the “apprenticeships” mentioned in the “Joint Committee on Reconstruction” piece from 1866.  “Apprenticeship” was a euphemism during the Reconstruction era, a name to make terrorism sound legal.

JONIQUA:  All of the figures in the painting are all together, like they are celebrating.  This reminds me of the picture “Claflin University Building” 1900 c.  Because it shows the good side of Reconstruction, of how all of the black people came together with a goal of education in mind.  Another aspect of this is a piece of writing titled “Life on the Sea Islands.”  How in [it] also black people came together to learn.

BEN:  Another element in Douglas’s painting that shows the bad side of Reconstruction is the KKK members in the top left corner of the painting.  They were one of the most feared terrorist groups in the Reconstruction.  Groups like these were the reason why blacks a lot of times couldn’t vote or use all their rights.  The KKK would murder any blacks trying to improve their position.  …  But Reconstruction was also good.  My last element from Douglas’s painting was the guy with the light circles standing in the middle of the painting.  You can see that he has lots of power by the light circles around him.  Even during Reconstruction, many blacks still had or achieved a lot of power.