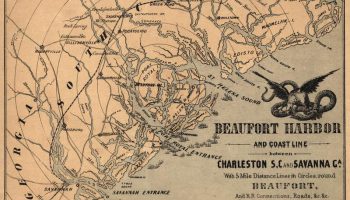 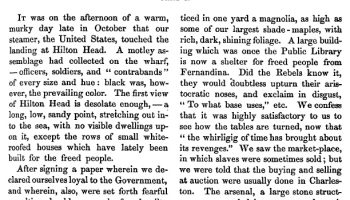 We read short excerpts from the journal of a young black woman from Philadelphia who worked as a missionary schoolteacher with the abandoned slaves, soon-to-be-freedmen, of the South Carolina Sea Islands.  Through this account, students imagine the enthusiasm for change in the young teacher’s pupils—a determination to learn that was strong enough to outlast their hard labor in the fields all morning before the afternoon at school.  Students also witness black soldiers in bright uniforms maintaining clean and comfortable camps and marching proudly in companies of the First (black) Regiment.  As one student wrote, “It kind of has the idea of … a new age coming.”

The excerpts are from Charlotte Forten, “Life on the Sea Islands,” Atlantic Monthly, May and June 1864.  She is writing about her experiences in the previous year or two.  (For links to the entire articles, a portrait of Charlotte Forten, and other related materials, scroll down to Additional Resources and click View More.)  The map at left is provided here for context and atmosphere.  We work with it in detail in subtopic 3 (The Landscape After Slavery, Part I).

For questions we asked students as they considered the excerpts, click View More.

NOTE:  It may be helpful to read first, at least in part, the Emancipation Proclamation (for high-resolution page images of the original document, scroll down to Additional Resources and click View More).

We read together the excerpts from “Life on the Sea Islands” — the first excerpt one day and the second the next — talking about anything the students found striking or confusing.  We asked:

The students pointed out words, sentences, imagery, and so on.

We then asked, for example:

By supporting their collaborative effort to make sense of the difficult vocabulary and syntax, we challenged the students to understand as well the settings and experiences the author was describing.  We challenged them to use the words of this eyewitness to envision her place and time.

Homework: We asked the students to imagine making a film based on “Life on the Sea Islands.”  We asked:

To read student responses to the in-class and homework questions, scroll down to Student Responses and click View More.

Kalil:  Why did the older ones work in the fields in the morning and then come to school excited and eager to learn?  I want to include this [in a film version of “Life on the Sea Islands”] because I want to show the excitement of these teenagers.  I want to show how difficult it was for the young workers to have the energy to learn in school after working in the field.  …  [In the film scene I imagine], a student is asking another, in an upset and angry way, “Why do we have to work so hard out in this hot and steamy field?”

Neil:  The first scene I would choose [for a film version of “Life on the Sea Islands”] is the scene of the former slave children in class because it would affect the minds of other people who believe that slaves were inferior.  It would show them that the black children were just as smart as white children, if not smarter.  It would make a lasting impression for most people.  Recently freed slave children learning is a strong image to me.

Rachel:  The children she speaks of probably have to work in the rising sun for most of the day and then still have to go to school, ready to learn.  That eagerness to go to school [is] very inspiring for anybody who is going to do something that takes lots of hard work and perseverance.  …  If I were to film them, I would show a picture of kids working in fields and then cut to a picture of the sun beating its rays and then back to the kids in the fields.  I would close up on one kid that would be sweating while working hard….  I would then fade … to the kids working hard [at school], a look of concentration on their faces.  …  Children who might normally have to work the whole day, go to school and learn instead.  It kind of has the idea of [Frederick] Douglass’s speech [“What to the Negro Is the Fourth of July?”] when he talks about the telegram being invented and a new age coming.

Julia:  When it says the band was playing and the flags were waving, it sounds like a parade.

Rachel:  It’s such a special occasion — they’re wearing the nicest attire.  “The whitest aprons” — it could be different from the usual brownish.

Clara:  Who is “everybody”?

Clara:  But what race?  It wouldn’t be white people dancing in the streets for joy.

Julia:  It could be, because they’re living in the camp with them.

Rose:  And later it says “men, women, and children, of every complexion.”

Rose:  I thought it was, like, bloodyish, because of their red pants.

Clara:  [Reads from the dictionary the definition of “barbaric”] “Marked by a lack of restraint; wild, primitive quality.”

Neil:  The other scene I would choose [for a film version of “Life on the Sea Islands”] is the welcoming of the freed slaves to the camp of the 1st South Carolina volunteers.  It would be powerful because the 1st was the second regiment composed of all black enlisted men.  Think about it — freed blacks being met by a black regiment.  The emotion would be amazing.  Any decent film-maker would recognize the potential of that much energy.

Click the highlighted words to go to any of the following five sources.  (To see all five, click View More.)