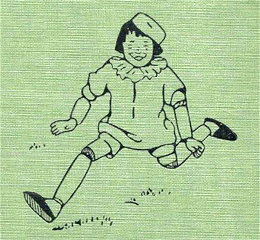 Pinocchio, the engaging marionette in Carlo Collodi’s nineteenth-century children’s classic, longed to be a real little boy.  Already, Pinocchio was no ordinary puppet.  Even before his father — the carpenter Gepetto — completed carving the wooden figure, it was sassing him back, stealing his wig and — on gaining feet — instantly running off into the world.  That big world brimmed with adventure, where alluring enticements inevitably gave way to hunger, hardship and calamity.  Duped, defrauded and deceived whenever out on his own, Pinocchio was uninformed about human duplicity while vulnerable to our pains and desires.  Combining a prankster’s spirit with a genuine sentimental heart, the mischievous puppet could not accept the single-path precepts and behavior of home and school, which offered safe-keeping from those predicaments.   From a puppet show’s glamorous stage to a filthy doghouse floor, from a body sprouting donkey-ears to his engulfment within a sea monster, Pinocchio’s escapades are multifarious, ever splitting off the advised route onto some next unexpected way.

Real boys are supposed to be obedient, to learn and do what they are told.  Pinocchio is not; as much as he regrets his disobedience whenever it brings him to harm, his rebellion soon resurges on any invitation to forsake school and duty for fun and games.  Yet, he learns:  “I know that from experience!  I won’t fall into that same trap again!” (p. 343).  Pinocchio’s adventures recarve him — not into the wooden likeness of any other figure, but into himself having heart and flesh.  He deepens in commitment to those who care for him, he perseveres in honoring their sacrifices with his own labors and, on feeling empathy, he makes a gift of coins he intended to spend on himself.  Although he never proved himself obedient, Pinocchio’s generous act moved his magical benefactor, the Blue Fairy.  Pinocchio wakes up as a real boy, aware, reflective and embedded in felt relationships with others.

Pinocchio’s adventures, the narrative and crucible of his learning, make a metaphor for learning and teaching through critical exploration.  As the classroom journey diverges multi-branching from pre-laid curricular plans, what the participants notice and yearn to explore becomes their personal opening to act, engage, resort to ingenuity, develop new capacities, respect and respond to others.  Instead of being applied to students under conditions of their obedience such as Pinocchio and his companions so often spurned, learning evolves  within the experience of each, with all the attendant mishaps, short-comings, spontaneous moments of receptiveness to and with others, and nonconforming yet deep realizations.  The puppet was told “puppets never grow” (p. 283), yet by his playing, suffering, acting and responding, the impossible became real:  Pinocchio grew alive.  In analogy, school often imposes a puppet-like role on students, but where they are encouraged to play, wonder, discover and then follow their own curiosity, students become real learners: alive to seeking, feeling, forming, constructing relationships among the world and themselves.

Note: I thank a reader of this blog for introducing me to Kohl’s essay reflecting on the puppet’s story, as interpreted by his first grade students, and its meaning for two educators of immigrant America:

Elizabeth Cavicchi teaches in the Edgerton Center at the Massachusetts Institute of Technology.